Civil rights attorney Andrew T. Bodoh with the firm of Thomas H. Roberts and Associates, P.C. won a notable FOIA victory for his client in the Hopewell Circuit Court.

“This is a triumph in government transparency for the citizens of Hopewell,” says Mr. Bodoh. “My client, Janice Denton, bravely challenged the City Council’s controversial decision to go into closed session to discuss who the Council would elect as City Mayor and Vice Mayor, and the Judge agreed what happened was wrong.”

The Virginia Freedom of Information Act (known as “FOIA”) is a law requiring certain meetings of public bodies in Virginia to be open to the public, and government records to be available to the public, with some exceptions. Mr. Bodoh specializes in FOIA law, and is the author of The Virginian’s Guide to FOIA, a handbook that assists citizens in exercising their FOIA rights.

FOIA allows local government bodies to go into “closed” sessions without the publice to discuss appointments. In January of 2015, however, the City Council of Hopewell went into closed session to discuss who the members would elect to the office of City Mayor and City Vice Mayor.

“Two council members opposed the vote to go into closed session and did not participate in that portion of the meeting,” Mr. Bodoh explains. “After the closed session, the five members who participated in the meeting cast the deciding votes in the contested election.”

Hopewell citizen Janice Denton believed the meeting was improper and chose to challenge the action in Court. After an unsuccessful hearing in the General District Court, she retained Mr. Bodoh and his firm to represent her in an appeal to the Hopewell Circuit Court.

The case was heard in August before Judge Sharrett. After additional written arguments by the parties, the Judge issued an opinion a few days before Christmas, ruling in favor of Ms. Denton.

“[T]he Court finds that there is a fundamental distinction between an ‘appointment’ and an ‘election,’” the Judge wrote. The Judge noted, “As [Attorney Bodoh for his client Denton] explains . . . , an appointment is the exercise of power by the body as a whole, whereas in an election, the power resides with individual members of the body.

Attorney Andrew Bodoh, a litigator with Thomas H. Roberts & Associates, P.C. literally wrote the book on FOIA in Virginia, in his recent publication, The Virginian’s Guide to FOIA 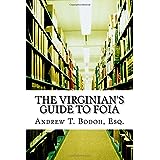 CASE RESULTS DEPEND UPON A VARIETY OF FACTORS UNIQUE TO EACH CASE.  CASE RESULTS DO NOT GUARANTEE OR PREDICT A SIMILAR RESULT IN ANY FUTURE CASE UNDERTAKEN BY THE LAWYER