12-15-2016– THE US COURT OF APPEALS FOR THE 4th CIRCUIT REMOVES WHAT IT DESCRIBED AS A “VIRTUAL BLANKET PROHIBITION ON ALL SPEECH CRITICAL OF THE GOVERNMENT EMPLOYER” BY STRIKING DOWN PETERSBURG POLICE DEPARTMENT’S BAN ON SOCIAL MEDIA CRITICISM OF THE DEPARTMENT.

In a sharply worded opinion issued on 12-15-2016, the Fourth Circuit Court of Appeals declared that the Petersburg Police Bureau’s social media policy is clearly unconstitutional.

Judge J. Harvie Wilkinson III issued the decision. He wrote: “[T]he policy here and the disciplinary actions taken pursuant to it would, if upheld, lead to an utter lack of transparency in law enforcement operations that the First Amendment cannot countenance.” (Emphasis added.)

Bodoh describes the opinion: “This decision is a resounding ‘Yes’ to government transparency and public discussion. The policy went too far in restraining police officers from freely discussing important issues going on in the community.”

Roberts adds: “In our democracy, government employees who see things going wrong in the government should speak up. And when they do, they should not be punished for it.”

In the case, Liverman and Richards sued the City of Petersburg and John Dixon, III, the former chief of police, challenging the Police Bureau’s social networking policy. They also sued for being disciplined under the policy for Facebook posts them made in June 2013. The Court declined to reconsider a third part of their case, related to later discipline.

The unconstitutional policy challenged in this case stated in part: “Negative comments on the internal operations of the Bureau, or specific conduct of supervisors or peers that impacts the public’s perception of the department is not protected by the First Amendment free speech clause, in accordance with established case law.” The policy also “strongly discourage[d] employees from posting information regarding off-duty activities” and threatened “appropriate disciplinary action.”

Excerpts of the decision include:

“[T]he restraint is a virtual blanket prohibition on all speech critical of the government employer. The explicit terms of the Negative Comments Provision prevent plaintiffs and any other officer from making unfavorable comments on the operations and policies of the Department, arguably the ‘paradigmatic’ matter of public concern.” (Emphasis added.)

“[T]he speech prohibited by the policy might affect the public interest in any number of ways, including whether the Department is enforcing the law in an effective and diligent manner, or whether it is doing so in a way that is just and evenhanded to all concerned. The Department’s law enforcement policies could well become a matter of constructive public debate and dialogue between law enforcement officers and those whose safety they are sworn to protect. After all, ‘[g]overnment employees are often in the best position to know what ails the agencies for which they work.’ But this policy will cut short all of that. To repeat, it squashes speech on matters of public import at the very outset.“ (Emphasis added.) (Second alteration in original.) (Citation omitted.)

“[T]he speculative ills targeted by the social networking policy are not sufficient to justify such sweeping restrictions on officers’ freedom to debate matters of public concern.” (Emphasis added.)

“[T]he facial overbreadth of the social networking policy is borne out by the disciplinary actions taken pursuant to it.”

“We find it significant that the officers chose Facebook as the forum for their communication. As our colleague Judge Traxler has recognized, Facebook is a dynamic medium through which users can interact and share news stories or opinions with members of their community.” (Emphasis added.)

“[T]he context of the speech buttresses our conclusion that Liverman and Richards were not simply airing personal grievances but rather were joining an ongoing public debate about the propriety of elevating inexperienced police officers to supervisory roles.” (Emphasis added.)

“Whether plaintiffs were correct or not in their views is not the issue. The matter they addressed was of more than personal import. We thus have no trouble finding that plaintiffs’ Facebook comments, which addressed risks posed by the Department’s inexperienced supervisors, raised issues of public concern.” (Emphasis added.)

“Chief Dixon failed to establish a reasonable apprehension that plaintiffs’ social media comments would meaningfully impair the efficiency of the workplace.”

“[T]his case does not involve gray areas: the right against such a sweeping prior restraint on speech was clearly established and then some.”

“This is not an all-or-nothing matter; there is a balance to be struck. But the Department’s social networking policy, and the disciplinary actions taken to enforce it, lean too far to one side.”

The case is Liverman, et al. v. City of Petersburg, et al., in the Fourth Circuit.

Bodoh explains the legal effect of the decision in this case: “The decision means Liverman and Richards will have their day in court. Their constitutional rights were violated by this policy, as were the rights of all Petersburg police officers. But Liverman and Richards were also disciplined under the policy. They were reprimanded, returned to probation, and then denied the opportunity to seek promotion.”

Bodoh comments on the broader effect of this decision: “This decision may well require other government departments across several states to rewrite their social media policies. It is one of the few decisions in this area of law that holds a government employee personally responsible, because he should have known what he was doing was unconstitutional. It is a great decision for government employees and for the public. We need government employees to speak out when the government is in the wrong, and they need to be able to participate in public debate about important social issues.”

Roberts stated “With violent protests erupting across the nation, it is paramount that good officers are permitted to criticize a department’s policies and practices on matters of public concern without fear of discipline.  We applaud the United States Fourth Circuit Court of Appeals for this clear decision upholding the First Amendment to the United States Constitution.”

This case has received national attention because the Fourth Circuit has emphasized the unique role that police officers as citizens may play in policing themselves by exercising their First Amendment rights in social media.  The court stated that the Petersburg policy was patently unconstitutional. (p 20)  With the court stating that “this case does not involve gray areas: the right against such a sweeping prior restraint on speech was clearly established and then some” (p 20), it calls into question why has the City of Petersburg spent so much time and money defending this patently unconstitutional “virtual blanket prohibition on all speech critical of the government employer”? (p 10) The court record shows that in an attempt to avoid suit and litigation, on October 1, 2013, this law firm wrote a letter to the Mayor and to the City Attorney, explaining to them the blatant problem with the policy and discipline based upon the policy, inviting them to sit down to attempt to mediate a resolution and warning that  “[t]his litigation will likely be time consuming, expensive, and embarrassing for the City of Petersburg.”   Today, we see that it has in fact been time consuming, expensive and now embarrassing for the City of Petersburg.

The amount of money spent by the City of Petersburg defending this patently unconstitutional policy would have been better spent on Firemen and Police officers protecting citizens.

To Listen to Oral Arguments 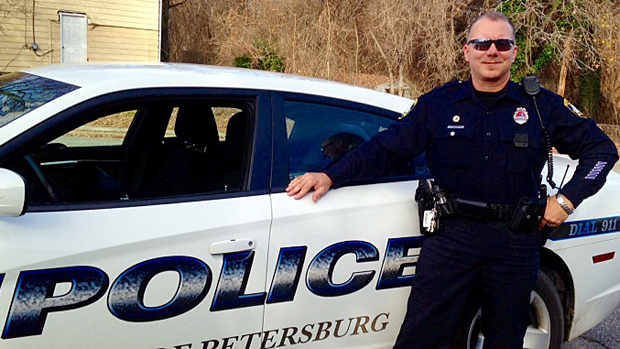 To Listen to Oral Arguments

Other: Articles regarding the case.

When the PD social media policy meets the First Amendment

Can I sue for injury or death of my pet dog or cat and can I recover emotional damages? »
« A SUMMARY OF POWER OF ATTORNEY LAW AND DUTIES IN VIRGINIA