Virginia Courts will not re-write or strike out, or “blue-pencil” restrictive covenants.

Traditionally an editor would use a blue pencil to make corrections to written copy since the corrections would not show up in a number of older lithographic or photographic reproduction processes.  The courts adopted the phrase “blue-pencil” test to describe a court striking a portion of an agreement and enforcing the balance of an agreement. 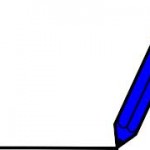 Generally, Virginia courts have declined to re-write contracts to remove invalid provisions or provisions against public policy, but invalidate the entire agreements.

There is some case law that could be interpreted (probably misinterpreted) to make the entire agreement invalid due to the use of “blue penciling” provisions.  Such an interpretation would is likely erroneous.   Virginia, simply declines to accept the authorization of the parties to re-write their agreement.

While the Better Living Components, Inc. case states “Courts in some other jurisdictions have also determined that a “blue pencil” power would be against public policy” the case does not invalidate the agreement due to the inclusion of a “blue pencil” provision. Better Living Components, Inc. v. Willard Coleman & Blue Ridge Truss & Supply, 67 Va. Cir. 221, 227 (Va. Cir. Ct. 2005)

Similarly the Cliff Simmons Roofing case does not support this argument.   There the court stated “As Judge Frank said in Pais v. Automation Products, Inc., “[T]his court has not been granted the authority to ‘blue pencil’ or otherwise rewrite the contract; the covenants therefore fail.” Similarly in this case, the Court declines to edit by selective enforcement what is otherwise an invalid restriction on competition. Cliff Simmons Roofing, Inc. v. Cash, 49 Va. Cir. 156, 158 (Va. Cir. Ct. 1999).