Police pointed weapon at me – is that excessive? 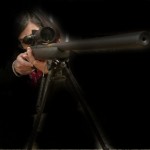 Question:  Is it a violation of the Fourth Amendment for an officer to aim his loaded weapon at a person where the alleged crime at issue is minor and nonviolent, the suspect does not pose an immediate threat to the safety of the officers or others, and he is not actively resisting arrest or attempting to evade arrest by flight?

Answer:  Yes, probably.  However, the answer is very fact specific, and the appropriate level of force should be judged from the perspective of an officer on the scene, rather than with the 20/20 vision of hindsight.

To state an excessive force claim under the Fourth Amendment, the plaintiff must show that (1) a “seizure” occurred and (2) the seizure was “unreasonable.” Brower v. County of Inyo, 489 U.S. 593, 109 S. Ct. 1378, 103 L. Ed. 2d 628 (1989)). When the officer invokes the qualified immunity defense, the plaintiff must also show that an objectively reasonable officer could not have thought the force used was constitutionally permissible, in other words, that they violated clearly established law.

Claims of excessive force are analyzed under the objective reasonableness standard of the Fourth Amendment. Graham v. Connor, 490 U.S. 386, 395-97, 109 S. Ct. 1865, 104 L. Ed. 2d 443 (1989). The reasonableness of the officer’s belief as to the appropriate level of force should be judged from the perspective of an officer on the scene, rather than with the 20/20 vision of hindsight. Id. at 396. Among the factors that courts should consider in determining whether a police officer applied excessive force are (1) the severity of the crime at issue, (2) whether the suspect poses an immediate threat to the safety of the officers or others, and (3) whether he is actively resisting arrest or attempting to evade arrest by flight. Id. The calculus of reasonableness must allow for the fact that officers must make split-second judgments in tense, rapidly evolving circumstances. Officers need not use the least intrusive means in the course of a detention, only reasonable ones.

An officer can stop and briefly detain a person for an investigation if the officer has a reasonable articulable suspicion for suspecting the person of criminal activity, even if the officer lacks probable cause, what is known as a “Terry Stop.” The use of firearms, handcuffs, and other forceful techniques generally exceed the scope of an investigative detention and transform it into an arrest. An arrest must be supported by probable cause, which exists only if the officer knows facts that warrant a reasonable belief that the person has been or is committing a criminal offense. Displaying firearms during an investigatory stop, however, does not violate the Fourth Amendment so long as police reasonably believe a suspect presents a serious and imminent danger to the safety of the police and public.

Pointing a firearm directly at a person involves the immediate threat of deadly force, and thus, “should be predicated on at least a perceived risk of injury or danger to the officers or others, based upon what the officers know at that time.” Holland ex rel. Overdorff v. Harrington, 268 F.3d 1179, 1192 (10th Cir. 2001). “Where a person has submitted to the officers’ show of force without resistance, and where an officer has no reasonable cause to believe that person poses a danger to the officer or to others, it may be excessive and unreasonable to continue to aim a loaded firearm directly at that person, in contrast to simply holding the weapon in a fashion ready for immediate use.” Id. at 1193

In another 10th Circuit case, Henry v. Storey, 658 F3d 1235 (10th Cir 2011), the court found that it was not unreasonable for 6 officers to point their weapons at a suspect thought to be driving a stolen car, the court reasoned,

Viewing the facts from a reasonable officer’s point of view, Officer Storey did not use excessive force by pointing his weapon at Mr. Henry. Officer Storey had probable cause to believe Mr. Henry had stolen a vehicle, a felony. Officer Storey could reasonably conclude that the driver posed an immediate threat to the safety of the officers and the public—a driver caught with a stolen vehicle has strong incentive to evade arrest, given the seriousness of the crime. Further, the means of evading arrest were close at hand: the driver was in the vehicle with the engine running. The incident took place late at night, within Albuquerque city limits. Any resulting chase could place the officers and the public at risk. Although Mr. Henry was not actively resisting or evading arrest by flight, under the circumstances the amount of force used by Officer Storey was reasonable. To conclude otherwise would merely second-guess an officer’s on-the-ground decision using the benefit of 20/20 hindsight. Id. at 1239 (internal citations omitted)

In the Seventh Circuit the court reached a different conclusion based upon a completely different set of facts, where the person had submitted to the officers’ show of force without resistance, and where an officer had no reasonable cause to believe that the person posed a danger to the officer or to others, it was excessive and unreasonable to continue to aim a loaded firearm directly at that person, in contrast to simply holding the weapon in a fashion ready for immediate use.  Pointing a firearm directly at a child calls for even greater sensitivity to what may be justified or what may be excessive under all of the circumstances.   The court stated,

It should have been obvious to Haskins that his threat of deadly force — holding a gun to the head of a 9-year-old and threatening to pull the trigger — was objectively unreasonable given the alleged absence of any danger to Haskins or other officers at the scene and the fact that the victim, a child, was neither a suspect nor attempting to evade the officers or posing any other threat. …  “Although the issue in [Tennessee v.] Garner [471 U.S. 1, 105 S. Ct. 1694, 85 L. Ed. 2d 1 (1985)] was deadly force, implicit in its totality of the circumstances approach is that police use of less than deadly force would violate the Fourth Amendment if not justified under the circumstances.”

The McDonald v. Haskin case was unsuccessfully relied upon in the Fourth Circuit, which stated: